Devil on the cross: One of our century's great novels tribune 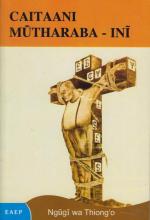 Devil on the cross: One of our century's great novels tribune

One of the cornerstones of Ngũgĩ wa Thiong'o's fame, Devil on the Cross is a powerful fictional critique of capitalism. It tells the tragic story of Wariinga, a young woman who moves from a rural Kenyan town to the capital, Nairobi, only to be exploited by her boss and later by a corrupt businessman. As she struggles to survive, Wariinga begins to realize that her problems are only symptoms of a larger societal malaise and that much of the misfortune stems from the Western, capitalist influences on her country. An impassioned cry for a Kenya free of dictatorship and for African writers to work in their own local dialects, Devil on the Cross has had a profound influence on Africa and on post-colonial African literature. For more than seventy years, Penguin has been the leading publisher of classic literature in the English-speaking world. With more than 1,700 titles, Penguin Classics represents a global bookshelf of the best works throughout history and across genres and disciplines. Readers trust the series to provide authoritative texts enhanced by introductions and notes by distinguished scholars and contemporary authors, as well as up-to-date translations by award-winning translators.

CITATION: Ngugi, Wa Thiongo. Devil on the cross: One of our century's great novels tribune . Oxford : Heinemann , 1987. - Available at: https://library.au.int/devil-cross-one-our-centurys-great-novels-tribune-4