News from Robben Island: Journalists' Visits to Nelson Mandela during his Imprisonment 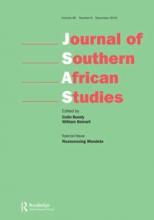 News from Robben Island: Journalists' Visits to Nelson Mandela during his Imprisonment

From 1952, when Nelson Mandela received his first banning order, the apartheid government attempted to remove the African National Congress leader from public life through issuing successive banning orders, censoring the publication of his words and image and finally sentencing him to life imprisonment in the maximum security prison, Robben Island. The notorious prison - a site of brutality, quarantine and resistance - was subject to the Prisons Act of 1959, which further shrouded it in secrecy. At the same time, the post-war growth of humanitarian and human rights law resulted in increasing global concern about conditions in prisons and, in turn, in the rise of activist organisations such as Southern Africa: The Imprisoned Society (SATIS), which advocated the release of apartheid's political prisoners. In order to prove that its prisons were humane, the state was pressured to allow human rights organisations and, increasingly, the media to have access. It was also pressured to permit access to Mandela, the country's most famous political prisoner. This article analyses four media visits to Mandela on the island (two in 1964, one in 1973 and one in 1977), when Mandela was interviewed and/or photographed, looking at the context that led to the authorisation of such visits, complex behind-the-scenes negotiations between journalists and the authorities, Mandela's attempted curation of his image, and the subsequent framing, publication, censorship and dissemination of information. The article argues that the state's attempts to control the discourse around Mandela and Robben Island grew increasingly less successful - particularly in overseas reports - and that Mandela's incarceration on the mysterious island contributed to his mythologisation. Even from a position of imprisonment, Mandela was careful to anticipate his reception abroad, establishing an irrefutable moral authority from the confines of his prison cell. His comments reveal his consistent appeal to western democratic sensibilities, his utilisation of human rights discourse and his careful negotiation of the issue of prison conditions.